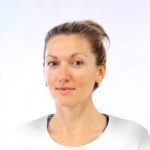 Yoga gave me a tool to develop myself and still the ability to realize myself as a loving mother and wife.

I believe yoga is a very powerful practice, that works not only with our body but also with our spirit, mind and soul. Conquering our small limits on the mat we are achieving beyond our limits in real life, by making our body and mind more flexible and strong, balanced and solid. Yoga just shows us what doesn’t work inside in order to manage our outside challenges. Yoga practice helps us to be more organized and self-confident, to set our mindfulness in life.
Yoga is closely connected with Ayurveda, the old science of good health and happiness with herbs&spices assistance. So I started to teach the related workshops as well.

From 2013 I have organized and held Yoga/Aurveda Seminars in the Carpathian region and in the city of Kiev.

Certificates
UYSN 500 -035-14 from 2013,
2014 of 300-hours program of theory and practice,
presented by Andrey Lappa according to the standards of the USA Yoga Alliance and Kyiv Federation of Yoga.